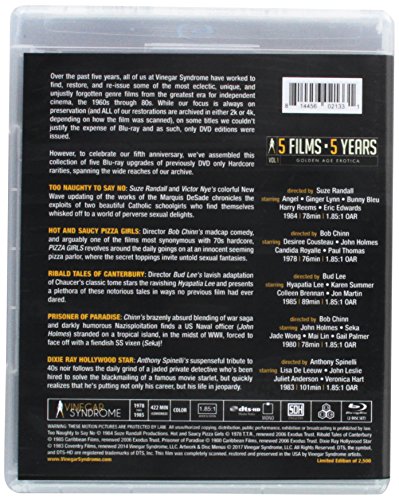 Over the past five years, all of us at Vinegar Syndrome have worked to find, restore, and re-issue some of the most eclectic, unique, and unjustly forgotten genre films from the greatest era for independent cinema, the 1960s through 80s.

To celebrate our fifth anniversary, we've assembled this limited edition 2-disc Blu-ray collection of five previously DVD only rarities, spanning the wide reaches of our archive. This set is limited to 2,500 units.

TOO NAUGHTY TO SAY NO: A colorful New Wave updating of the works of the Marquis DeSade chronicles the exploits of two beautiful Catholic schoolgirls who find themselves whisked off to a world of sensual delights.
starring: Angel, Ginger Lynn, Bunny Bleu, Harry Reems, Eric Edwards