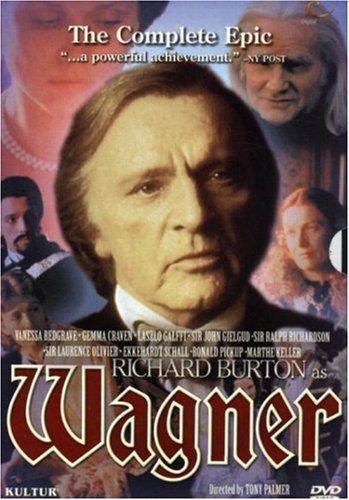 Over a hundred years after his death, Richard Wagner remains an enigma. His was a rags-to-riches saga with a fairy tale ending. He was loved, yet hated; admired, yet despised. He was a heroic villian who was worshipped and whose fame and exploits were the gossip of Europe. Above all, he was an incurable romantic whose affair with Liszt's illegitimate daughter rivals that of Romeo and Juliet. But he was also a dangerous political revolutionary whose influence penetrated the fabric of German society in the nineteenth century. He was a legend in his own lifetime, and he was one of the greatest composers to ever live. Only an actor of the stature of Richard Burton could measure up to the titanic character of Wagner, and this proved to be his final film role. Academy Award winner Vanessa Redgrave co-stars as Cosima, Wagner's second wife, a woman who had a dramatic impact on German history until her death in 1930. The incredible supporting cast also includes screen legend Sir Laurence Olivier. Filmed in wide screen 35mm Dolby Stereo, this major drama production is one of the largest East West coproductions ever undertaken.
Tweet