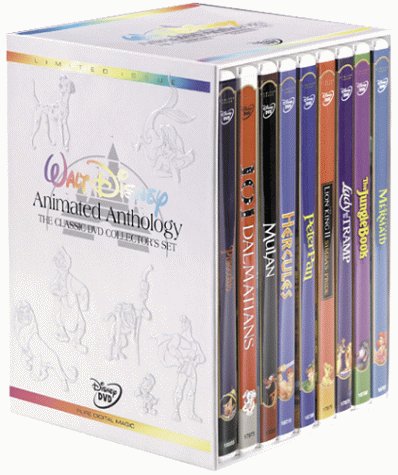 All nine of Disney's first collection of animated classics on DVD are included in this set. Some of the nine titles include bonus features, and the DVD format will provide optimum sound and picture quality for the young and old collector alike. The crown jewels are Pinocchio and The Little Mermaid. The former celebrates its 60th anniversary with a brand new print, while the latter is the 1989 film that revitalized Disney's animation wing and brought new audiences to the art form. Both offer Oscar-winning songs. Two of the popular classics from the '60s are represented with 101 Dalmatians and The Jungle Book, which was the last animated feature that Walt Disney directly worked on and which saved the animation department when it was a box-office hit in 1967. Hercules and Mulan make great strides in the look of animation. The mythical figures of the former are based on the radical designs of Gerald Scarfe, and the latter makes bold advancements in computer animation in the refreshingly unknown legend of a Chinese girl. The collection rounds out with Lady and the Tramp in a grand widescreen format, the charming Peter Pan that hardly shows its age, and 1998's The Lion King II: Simba's Pride, a made-for-video sequel. Although the sequel is entertaining, it's frustrating to note the original The Lion King has been kept out of circulation completely for a few years (as Disney does with many classics), gearing towards a grand future release into theaters. --Doug Thomas
Tweet