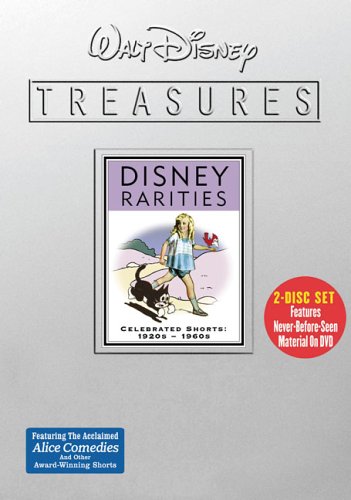 This fascinating volume features some of Walt's most unique animated triumphs. Included are several of Walt's "The Alice Comedies," a pioneering series of early short films that combined live-action and animation. These wonderful, lesser-known unique films pre-date much of the work that would make him world-famous. "Alice's Wonderland" is one of Walt's very first films. Fans will enjoy the unique animation of "Toot, Whistle, Plunk and Boom," which won an Academy Award(r) (Best Short Subject (Cartoon) 1953) and was the first cartoon produced in Cinemascope. This short film established a completely new animation style for the Studio. DISNEY RARITIES, CELEBRATED SHORTS 1920s-1960s showcases a large collection of Walt's outstanding animated shorts that fans may not be aware of. Bonus features include: "Alice's Cartoon World" in which Leonard Maltin discusses Disney's historic "Alice" shorts with Virginia Davis who played the original Alice when she was 4-years old; "From Kansas City to Hollywood" - a timeline of Walt's silent era; "A Feather In His Collar" a rarely seen short supporting the Community Chest; audio commentary for "A Symposium On Popular Songs" by composer Richard Sherman, and still frame galleries. Introductions by Leonard Maltin.

This extraordinary volume of rare Disney magic showcases some fascinating characters never before seen together. From Walt's earliest work in the 1920s to some of his most sophisticated shorts of the 1950s and '60s, he captured the imaginations of millions plus two Academy Award(R) wins and eight nominations all included in this volume. Among the gems is Walt's first hit cartoon series